Prelude: Following the Italian defeat at the Battle of Al Hani-Sciara Al Shutt of Tripoli in October, 1911. and to give legality to the atrocities that followed, the Italian high command formed a walking court that convened any where in the streets of Tripoli and judged Libyans that were found always guilty and their punishment was death by the firing squad. British military journalist Francis McCullagh, in his book “Italy’s War for a Desert” gave a vivid account of this Italian method of bringing civilization to Libyans at the time. 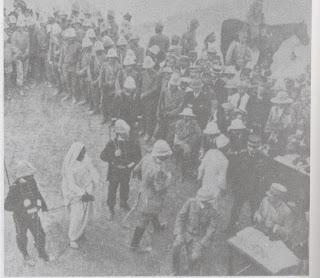 On 11th January , 1930, General Graziani was in Umm Al Araneb in Fezzan. He was bringing Pax Romana to the region when he received Marshal Padoglio’s cable informing him that he was appointed Deputy General Governor of Cyrenaica, that he was to finish his current assignment and to report promptly to the High Command in Rome to receive his instructions. In Rome, the Duche’s instructions were clear and precise; to crush the national revolt in Cyrenaica at whatever cost and by all means conceivable.
On 27th March, 1930 the General arrived by boat to Benghazi, he reorganized his forces and initiated his campaign of “Guerra Senza Quartiere”. One of the ruthless methods of this Guerra was the revival of the Street Court, which was upgraded to a ‘Flying Court’. An aircraft was assigned to the Special Flying Court and its job was defined as follows: 1) Enforcement of Law strongly. 2) Prompt execution of verdicts. 3) Executions were to take place in lieu of crime. 4) Court to convene outdoors and must be attended by local population. 5) Total Control and Maximum Exposure must be maintained all times.
The court used all available transportation means including aircraft, and it became known as the Flying Court. General Graziani, in his book ‘Pacified Cyrenaica – chapter 3’ wrote of an example of this court sessions.
Quote …
“On 14th June, 1930, the Flying Court convened in Shahat to judge the case of citizen Hamad Bu AbduRabbah ElDerssi حامد بو عبد ربه الدرسى in the general square of high treason. The accused was chief of a branch of Derssa Tribe and he was respected by our authorities. However, according to army intelligence reports he was a collaborator with the rebels. He provided them with arms and supplies, and his tribe camp offered refuge to rebel fighters. He was found guilty and executed on the spot by the firing squad in Shahat general square in front of members of his tribe.”
Unquote ..
According to the figures given in this book, the court looked up a number of 448 cases of accused Libyans, out of these the court gave 250 verdicts of capital punishment against 198 verdicts of imprisonment and exile to the Italian tiny islands. In the Fascist eyes the concept of justice was like its emblem of ‘Governorship and Military Justice, and under their Glory, the State ruled this land by Fascist and Roman Principles’
Posted by Omar Gheriani at 10:28 AM

I tried to get a copy of McCullaghs book thru abebooks.com but at 100 USD a copy, I passed.

The Flying Court is also mentioned in Knud Holmboe´s Desert Encounter, which you surely know.

Enzo Santarelli in his book about Omar al-Mukhtar also gives some accounts and data about the Flying Court.

Finally the Flying Court is mentioned and explained in Journal of Strategic Studies, Volume 28, Issue 6 December 2005 , pages 1005 - 1032 in a paper called "Re-conquest and Suppression: Fascist Italy's Pacification of Libya and Ethiopia, 1922-39" written by John Gooch from the University of Leeds.

Thanks Safia for your comment. And actually I didn't know of the second and the last, so that's new to me. Thanks again.