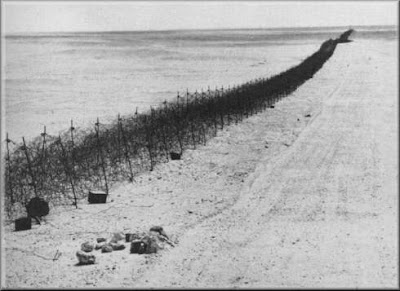 As the Fascists became more hysterical in their attempts to bring Cyrenaica down to total submission and to cut off all outside support for Omar Mukhtar free fighters, it was decided by General Graziani to build an artificial fortified barrier on the Egyptian borders.
This barrier of barbed wires was over 270 km long starting from Assalumm on the coast to the Deep South, south of Jaghbub, and it was 10 meters wide and 1.5 meter high. The barrier crossed the hills and valleys of Mermarica until it reached the high hills of the Libyan Desert.
The barrier consisted of three centers for guards and six extra guards’ posts and 3 airstrips and an airbase suitable for 4 military aircrafts. The barrier was also provided by a telephone line for instant communications.
The barrier was constructed by an Italian company for public works using 2500 Libyans as a slave labor working in a very savage hot environment and temperature rising up to the 40’s D.C. in the shade as an average for a period of six months. There were 1200 armed soldiers overseeing the works. 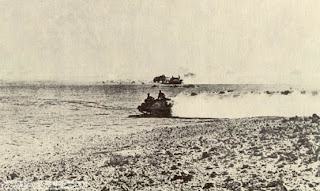 According to Gen. Graziani book ‘Cyrenaica Pacified”, the project used the following materials:
- 263,343,000 meters of barbed wires.
- 269,628,000 iron bars.
- 27,000 tons of cement.
- 18,225 tons of water.
- 200 trucks were assigned for land transportation.
- 18 ships were assigned for maritime transportation.
- The Financial Cost reached 17,737,173.80 Lira.
At the end of the project Gen. Graziani thanked all “all foremen and workers who supervised the works, and the services of military trucks and the the military police”. For all those GG presented his appreciation and admiration. 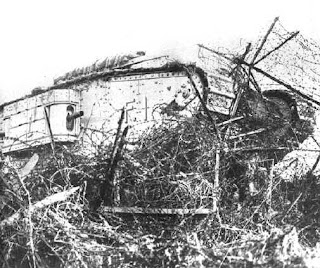