Prelude: According to our recorded history, it is most probable that the name Benghazi was derived from name of the learned and holy Maghrebi Sheik Ghazi bin Ghazi who settled here and buried in Sidi Khrebeesh cemetery some time in the second half of the fifteenth century. As days went by, the Salt Pit كوية الملح which was the popular name of this place was replaced by Marsa bin Ghazi or bin Ghazi’s Harbor. The first merchant settlers from western Libya came then from Tajura, Messulata and Zletin, possibly at the time of the Spanish invasion, and later on, a greater number of settlers arrived from Misurata in the second half of the sixteenth century, and the ancient mosque الجامع العتيق was rebuilt. Gradually Benghazi became known by this name which replaced its ancient name of Berenice on modern maps. Benghazi was inhabited by competent merchant settlers surrounded by Bedouin tribes; it had a safe harbor and a local wealth of salt, and thus prospered as a commercial centre, for commerce brings people together. 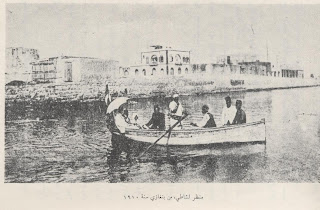 HADERZA FI BENGHAZI is a small , beautifully written and smartly produced book by Dr. Mohamed M. Almofti. The book is about the social history of the town of Benghazi, and draws a picture of its general history from the beginning of the nineteenth century up to the fifties of the twentieth century. The writer lived his childhood in the fifties in Souk Al Hashish at the centre of the old city, which Sadik Al Nihoum made eternal by his writings of old Benghazi of the fifties and sixties.
The writer starts by defining our culture which is fond by the abstract, generalization and immaterial values which leaves little for paying attention to details of things, and it draws away of discussing particularities. According to this way of thinking, we have little recorded history of how our ancestors’ way of life was, how they lived from day to day and the causes of their joy and their suferance, en bref their social life. Let’s call it simple lives of simple folks.

On this basis the writer tells the social history of Benghazi, which started as a commercial center with a good port and by the absence of agriculture in its region it became the magnet for the commodities arriving from the Libyan and African hinterland that to be exchanged by imports of Europe. Benghazi gathered in its market the artisan products of Misurata, olive oil of Zletin, Spices, ivory, gold dust and other African commodities coming from African Wadai and Bornu in exchange of European products such as glass ware, textiles, metals, arms and ammunitions. And let’s not forget Benghazi’s main product; the salt produced from its own salt swamps and the sheep herds of the Bedouins surrounding it. Benghazi received the hinterland products and exchanged them by European products.
Why do Benghazi citizens love Benghazi? Most of the original Benghazi inhabitants were immigrants from other parts of western Libya, and few of them were refugees from Crete, who came to live in Benghazi. The town accommodated and welcomed them all and they made it their home. Cyrenaica of which Benghazi was only a small part was a stronghold of Bedouin tribes and the tribal structure represented the existing form of Government, the tribal chiefs with the Sharia made the law. Benghazi’s’ immigrants learnt by then how to accommodate themselves in such tribal dominating environment. Each group of them living in a close quarter of the town made a confederation collecting the descendants of the tiny bits of their original tribes melting them into a new entity, a new tribe if you like, that took care of all its members and spoke their name with the other surrounding Bedouin tribes. Thus few new collective tribes were formed in Benghazi, and they were accepted and respected in this environment of tribal power. On the other side that was probably how every town had grown up and became a civic society, and how the tribes ceded their power to the town common wealth of all city citizens regardless of their tribal origins.
The Ahali, the Citizens of Benghazi, were formed and melted in this way with members of the native tribes and a new culture and new identity were formed. For instant, when we refer about such things as, Benghazi accent or Benghazi customs we mean those two related to Benghazi and not to any other place in Cyrenaica, the town acquired an identity.
Dr. Mohamed Almofti takes us through the social history of Benghazi from the beginning of Benghazi as a Commercial Carrefour to Benghazi during the Italian colonization and how its inhabitants fared in the days of the Jihad, how WW2 started and how Benghazi changed hands between the Italians, the Germans and British and how each conqueror made his revenge and of the looting that accompanied each conquest. Then he told us of the days of the British Administration after WW2 and the hopes of Libyans finally for a better peaceful day to come, Libya became independent and people rejoiced.
The writer draws a portrait of his childhood in Benghazi of the fifties, an era of toil and hardship but also of excitement and a feeling of participation as while growing up you watch the changes that hit the world every day, of the formation of political awareness towards Pan Arabism, of Nasser’s Revolution and the war for independence raging savagely in Algeria and how Libyans supported both. His description of these events represents the same picture of every Libyan town at that era, for regardless of the huge size of Libya news traveled fast, and as the writer said, that we live in islands scattered in a great ocean but our history unifies us. He gave beautiful pictures of Benghazi life as it was in its simplest forms, of Garagouz show of Bazama, of Al Jihani’s bicycles rental shop and of the day they watched the carcass of a whale that passed Benghazi carried on a flat bed truck. He told us the story of Aziza, the orphan Bedouin girl from the concentration camps who was raised by the sisters and trained in Tripoli to be a midwife, how an independent and respectable girl she was, and the pioneer Libyan women like Abla Hameda Al Anezi, Khadija Al Jehme and others. He told us about the great event of opening the Libyan University in 1955 and about the great poet Rafiq Almehdawi and the press that flourished in Benghazi from the forties.

The writer called his book as HADERAZA because the word has a meaning and a spirit. Haderza is an open dialogue being generated with every memory and every picture. Haderza allows exchange of opinions and concepts without any attempt for lecturing, preaching or make belief.” Haderza is a true form of democracy. 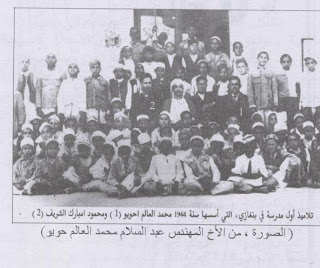 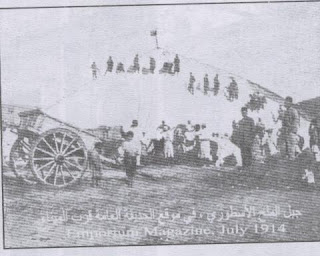 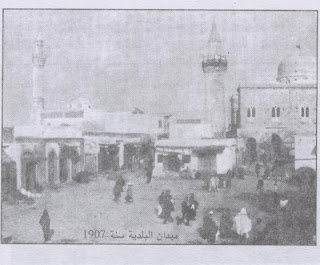 Hello
i read your preview of this book(Hedreza Fi Benghazi),and it was really good.I read the book a while ago ,when it was not (AVAILABLE) at market,and i did love it.once i satrted reading the introduction i could'nt put it down.
i had the honor of meetin Dr. M. Elmofti once,and we had a brief and interesting discussion about the book ,and he had told me about the obstacles he faced fter printing the book.he has such a charming personality indeed ,and i wish i'd have the chance to meet with him again.
Simple and plane,the book had changed the way i think of benghazi,it gave me a whole new prespective of a city we forgat to love ,and a place whose history was ignored and overlooked.
I recommend the book for anybody,it is attarctive ,simple ,informative and well presented.
Great work indeed,good post.
Regards

BC, like you I started reading the book one evening and I finished at dawn. Thanks for commenting.

I have never visited benghazi. Inshallah some day I will :)

Thank you for educating your young Libyans sons and daughters :)

You're very welcome mani. A reminder yes, but I didn't mean to educate, however, thank you.