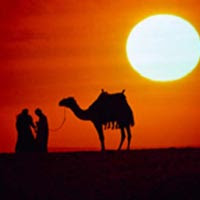 From the Net:
The following is quoted from an anthropological study of relations between nomads and sedentary people undertaken In 1973 by Dr Asad (anthropology Professor at University of Hull, England).
Dr Asad wrote on Bedouins' military power in history and if it could still be taken seriously in modern times.

Based on the Libyan-Italian case, he concluded that it cannot! (!!!)

(For an example the writer mentions General Graziani, who fought Libyan guerrillas all over Cyrenaica for about a whole decade.)
Asad summarizes Fascists military phases in the war as following:
(1) attempt to subdue by regular army units, (2) use of airplanes and jeeps, then finally and most destructive was (3) massive concentration camps for entire population of Cyrenaica.
Here's how the second phase was done:
"The Italians adopted the new tactics of making surprise raids by mechanized units on the Bedouin encampments, slaughtering man and beast indiscriminately, and destroying the grain stores, In these raids, on what in a noncolonial war would be regarded as the civilian population, the purpose was to kill as many of the Bedouin as possible, striking terror into the hearts of shepherd folk of Cyrenaica. When the rains came and mechanized transport could no longer be used, the camps were bombed and machine-gunned from the air."

Asad then describes later stages and how it got hysterically bad because of too much resistance:
"Graziani was determined to wrest the initiative from the guerrillas. He reorganized his forces for the last round in the 'guerra senza quartiere' into small mobile patrols to keep the whole of the [desert] country under surveillance and to attack the enemy wherever they met him, giving him no rest. To prevent the guerrillas from obtaining supplies and reinforcements from the civilian population he disarmed the tribesmen, confiscating from them thousands of rifles and millions of rounds of ammunition, and made possession of arms a capital offence. He instituted the 'tribunale volante,' a military court flown from point to point to try, and execute all who had dealings of any kind with the guerrillas. He reduced the Libyan units by more than two-thirds, with the intention of disbanding them altogether later. In the meanwhile he distributed among the 750 Libyans retained in service rifles of a different caliber from rifles in Patriot hands to prevent leakage of ammunition. At the same time he closed the Sanusiya lodges, confiscated their estates, and exiled their Sheikhs to the Island of Istica. He also much improved the communications of the colony, thereby easing his supply problem and economizing man-power.
"It may be doubted whether all these measures would have been effective if he had not also started his immense concentration camps for the entire tribal population of Cyrenaica, about whose feelings the General had no illusions. In taking this step the Italians were doing no more than others had done before them and have done after them, for an army fighting guerrillas is fighting an entire population. The first concentration camps of January 1930 were found to be too near the area of military operations, for the prisoners, in spite of close surveillance, still managed to supply the guerrillas with some of their requirements; so most of the Bedouin were removed to the barqa al-baida and the Sirtica. In this bleak country were herded in the smallest camps possible 80,000 men, women and children, and 600,000 beasts in the summer of 1930. Hunger, disease, and broken hearts took a heavy toll of the imprisoned population. Bedouin die in a cage. Loss of livestock was also great, for the beasts had insufficient grazing near the camps on which to support life, and the herds, already decimated in the fighting, almost wiped out by the camps.
"The guerrillas thus found themselves cut off from local sources of supply and forced more and more to rely on Egypt for the bare necessities of life and of war. For years a considerable part of their supplies had come from there, paid for by Bedouin produce, money raised by customs charges, and funds collected throughout the Arab and Muslim world. Supplies came through the port of al-Sallum, and the Egyptian Frontiers Administration must have closed its eyes to supplies going into Cyrenaica as tightly as to refugees going out of it, The Marmarica had been declared by [Graziani] a military zone, its people being removed to concentration camps, and the closed frontier was patrolled by armoured cars and planes with instructions to destroy any caravans they spotted, but, in spite of these precautions, supplies continued to reach the Patriots. Graziani therefore decided to run a line of barbed-wire entanglements from the sea to Jaghbub and into the dunes to the south of it, a distance of over 300 km. The work was completed early in September 1931 and control along the wire was operated through fortified posts, a telephone system, and aviation camps."
Link: http://saharasafaris.org/hassaneinbey/egyptandorient.htm
Posted by Omar Gheriani at 11:49 AM

More good stuff Gheriani.. nothing to add or question just seeking to learn and thirsting for more..

thank you for your committment

Thanks Mani for your kind words.

thank you for sharing that with us