It was the custom of the Turkish Governors of Tripoli to build a mosque, a military fort or a school in the land, in order to leave something to be remembered with in history.
Turkish Governor, Ali Riza Pasha, who was Algerian born and ruled Tripoli in two terms during the sixties and seventies of the nineteenth century, built a tower with a clock at its top.
Ali Riza, nicknamed Aljaezeri على رضا باشا الملقب بالجزائري, was educated in France and was probably influenced by what he saw in Europe of signs of civilization, of public buildings and city organization. He probably wanted to leave something new to be remembered with, something that was useful and essential to everybody in everyday life, for great and simple folk alike. Was he impressed with the European sense towards time? Did he consider that time was a very important factor in the progress of nations? Did he want to influence his citizens to consider time as a very important factor in their lives? I have no answer, but the fact remains that he was the first ruler to provide a modern machine to measure time as a public service in Tripoli city, and the project was funded by the Awqaf Bureau دائرة الاوقاف .
Ali Riza ruled in two terms, the first from 1868 to 1870 and the second from 1874 to 1882, and most probably that the Tower Clock was built during his first term.

AT the corner of the south eastern entrance of Suk El Turk سوق الترك , the tower clock basis were erected by professional masons. The clock machine itself was imported from Istanbul. The tower rose, like a square minaret according to the Ottoman architecture, up to over than 18 meters and divided to two floors, while the third floor was kept for the clock itself. The first and the second floors each had four windows. The ground floor had a main door that opened on the square that became called, “The Tower Clock Square”. Columns of marble rose from the four sides of the tower and met at their top end by multiple crowns.
During the term of Governor Nameq Pasha (1882-1898), the tower clock was renewed and some decorations were added to the structure.
The Tower Clock became one of the signs of Tripoli city, and people became used to the clock’s continuous and monotonous ringing every quarter to the hour. The clock had an employee to maintain it, to adjust it and keep it running. The ringing of the clock became part of the city’s noise and everyday life, and the ringing continued for decades to come.

During WW2 the clock tower became a military target and had a direct hit. The Clock stopped, and it stopped forever.
It seemed possible that the remains of the historical damaged clock were considered as junk and sold during the British mandate in Tripoli, when everybody was collecting what remained of the war of huge scraps of metals scattered all around. And it seemed most probable then, that the remains were exported to some museum in Europe. We don’t know.

The clock is still there but SILENT! During my last visit to Tripoli, few days ago, I noticed that the renovation of the tower was finished, and it looked beautiful, majestic and proud.
Tripoli has changed dramatically since the clock was built, but I am very glad that the clock is still there. The Tower Clock, the Clock Square and even the little coffee shop on the square are part of the Tripoli that has a great history to be proud of. 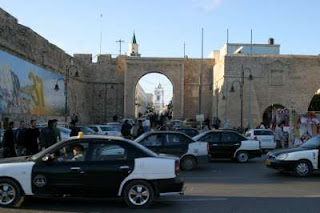 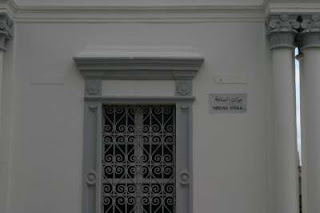 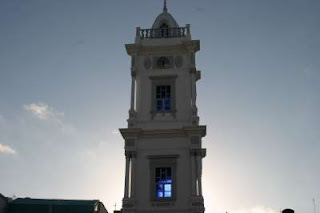 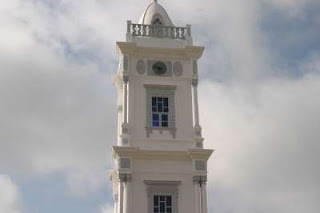 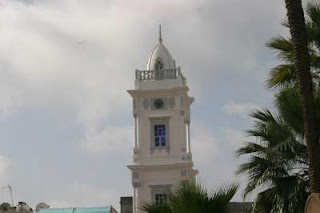 References: City of Tripoli across the Ages مدينة طرابلس عبر التاريخ by author: Najem Eddin Ghaleb El Keep نجم الدين غالب الكيب published in 1978 By Dar Al Kitab Al Araby, and an article written by an unknown citizen in the Tripoli newspaper “Flame of Liberty شعلة الحرية” in 17/06/1951, the writer signed as a concerned citizen 'Hurt Citizen’ = متألم.
Posted by Omar Gheriani at 12:02 AM

I was always fasinated by the clock tower, I used to stare at it when I was young, until today I hardly knew anything about its history although I knew that it has been renovated and that the clock still doesnt work!
Thank Gheriani again.

Great information as usual, the tower has been one of my favorite monuments in Tripoli and I was happy that they refurbished it in a nice way hope this will extend to all the old city quarters. Ghazi

Thanks AngloL and Ghazi. Like both of you the tower clock always held my facination. Unfortunely, they don't make the original ringing clock anymore. And regarding the Old City works continue, even slowly.