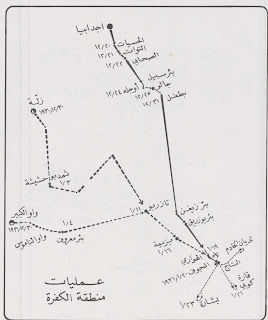 Kufra الكفرة was a spiritual and intellectual centre, a carrefour of caravan routes and an important commercial centre in the Grande Sahara.
Kufra was never invaded and never colonized by any foreign power. Kufra was a place coated by spiritualism, awe and invincibility.

ByApril 1930, General Graziani forces accomplished the reconquest of Tripolitania,, Fezzan, mid Libya down to the 29th parallel and the major parts of Cyrenaica with the exception of Omar Mukhtar enclave.
The Libyan free fighters of those conquered areas either died in the Jihad, surrendered or immigrated to neighboring countries, as far as Turkey. Some of them however, regrouped in Kufra and continued resisting the Italians and attacking their bases in the north as far as Jdabia اجدابيا.
In Cyrenaica, the Italians followed a strategy of siege and enclosure. Graziani, who was appointed deputy Governor of Cyrenaica in March, 1930, constructed 300 km of barbed wires on the eastern borders with Egypt cutting thus all routes of supply and reinforcement from the Egyptian side. On the local front, he established concentration camps for more than 126,00 people, in four main locations in isolated and arid areas of Cyrenaica, in order to cut off all food supplies and recruiting fighters for Omar Mukhtar and his companions in the Green Mountain. He actually enforced a major displacement of whole tribes –including old, young and children- from their original lands to big organized prisons surrounded with barbed wires and guards accompanied with fierce dogs. The fatality of the camps population was more that 50 percent. 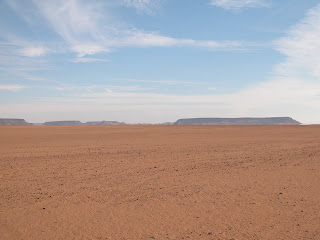 On 4th July, 1930, the Italians performed air attacks on Tazerbo تازيربو , in the Kufra region, destroying its few mud houses and creating a state of panic between its inhabitants, most of them never have seen aircrafts before. On 26th December, 1930, more air attacks were directed towards the Kufra clustered oases in Al Jouf الجوف and Al Taj التاج.
On 30th December, 1930, the main attacking force of the Kufra campaign left Jdabia اجدابيا heading towards the South. More supporting forces left from Zella زلة and Wao Al Kebir واو الكبير making the whole force combining of:
- More than 4000 soldiers, Italians, Eritrean and local bands (i.e.Libyans).
- 5517 camels to carry provisions, water and ammunition.
- And unrecorded number of automobiles and armored cars.
The Italian army intelligence estimated the Libyan free fighters in Kufra region with a total number not exceeding 600 armed men.
The attacking force arrived in January, 1931, and General Graziani, who was appointed chief commander of the campaign followed by air on 12th January.
The first battle occurred on 19th January, 1931, in Al Hawari الهوارى , and moved to Al Hawareri الهويريرى later on the day. Then General Graziani gave his order to direct nine RO attacking aircrafts to eliminate any escape route of the Libyan fighters, who fought valiantly against any hope of victory or survival.
On 20th February, 1931 The Italians occupied Al Taj التاج , centre of Kufra, and Kufra region fell to the Italians for the first time almost twenty years after their landing in Tripoli, and for the first time in recorded history a foreign invader arrived there.

Orders were given to kill any armed persons on sight, sheiks of the Oases were gathered and hanged afterGraziani’s invented process of flying courts.
The great Kufra library containing tens of thousands of rare books and manuscripts that were collected during a century were scattered , stolen or destroyed. Only 5000 books were salvaged by the civil Italian authority and of those only 2000 books reached Benghazi Awkaf Office أوقاف بنغازى .

The Libyan resistance in the southern Sahara provinces ended and the remainder of Libyan fighters died or fled to neighboring countries.

Italian General-Governer of Libya, Badoglio, flew from Tripoli, and he personally raised the Italian flag bearing -the Cross- on the Senussi Headquarters in Al Taj Zawia.

“Colonel Leclerc, on the orders of De Gaulle in London, was tasked with attacking Italian positions in Libya with the forces at his disposal in Chad which had declared for Free France.
………..
After the success of the Murzuk مرزق raid Leclerc, who had assumed overall command, marshaled his forces to take on Kufra itself.
…………
Despite having superior numbers, Italian resolve faltered. Negotiations to surrender began on 28th February and finally on 1st March,1941, the Free French captured El Tag التاج and with it, the oasis at Kufra.”
Posted by Omar Gheriani at 11:55 PM