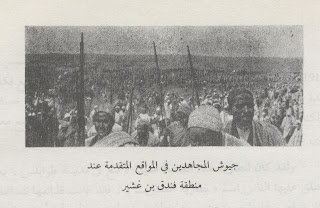 Armies of Mujahedeen gathering in the advanced positions
in the district of Ben Gasheer 20 km from the city of Tripoli. 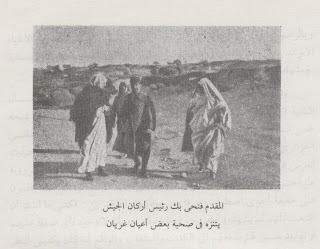 “Upon my arrival to Gharyan on the 2nd of February 1912, I was received by Major Fathi Bey, who used to occupy the post of Military Attaché at the Othman Embassy in Paris. Since the beginning of this war Major Fathi proved to be a good administrator, organizer and a brave commander. He offered me his friendship and hospitality. As a matter of fact, all Turkish officers I met offered me their best hospitality, and here in Gharyan it was with a special flavor.
I have to mention that I was asked before entering the Libyan frontiers –from the Tunisian borders- to deliver a load carried by a camel which contained clothes, presents and food parcels sent from Italian families to the Italian prisoners of war in the city of Gharyan. Colonel Nashaat Bey, General Commander of Othman Armed Forces in Tripolitania, already ordered personally for those parcels to arrive safely to their destination and hired a camel which carried the parcels at the expense of the Turkish government.
Later on I met the Italian POW and I was granted the freedom to speak freely with them in Italian. My first question was, “Have you been well treated?”
They answered, “Yes..Also the doctors here are continuing in observing and treating our wounds and maladies. When we were captured we feared the worst, but the Turkish doctors and officers, and the Libyans as well, treated us from the beginning with a good, humane and manly manner”
I made a thorough investigation to find out if the Italians were telling the truth or were afraid of their captors but I became convinced that they were telling the truth and there was no pressure or threats making them telling lies in order to protect themselves.
I met also both of Dr. Yousef and Dr. Refaat, who were Turkish and trained in Paris hospitals, the first had his medical training in Hopital Cochin and the second in Hopital Val de Grace.
The POW told me that they had become accustomed to eating the traditional Gharyan dishes like ‘Zammita’ and the spicy “Bazin”, and asked me to inform their families in Italy through what I would write in my magazine, that they are treated fairly and both Libyans and Turks don’t treat their POW badly. I took finally my leave and wished them safe return to their country and that peace may come to the land.
It was believed in the beginning of the Italian invasion last year that the Libyan resistance will retreat to the mountains and leave the plains to the invaders. However, the Italians failed to advance into the interior until now, and the Turk-Libyan forces are still camping in Azizia, only 40 km from the city of Tripoli, and attacking the Italian garrisons on the coast.
When descending from Gharyan at Abughilan, the Libyans who accompanied me told me that the Holy Man –Sidi Abdussalam Lassmar- in his predictions told that: ‘The People of Tripoli will be defeated in the beginning, then they will conquer their enemies in the valley of Abughilan itself, and then the dawn of Islam will rise again upon this land’

On the 5th of February, 1912, I arrived at Azizia where there were Turkish Forces and Libyan volunteers –Mujahedeen- gathering in full force.”

Georges Remond was a French reporter de guerre sent by his Parisian weekly ‘L’Illustration’ from 17/01/1912 to 30/06/1912 to cover the war events –from the Libyan side- after the Italian invasion.
He collected then his writings about his travels in a book he called:
“Aux Camps Turco Arabes’
Notes de Route et de Guerre en Cyrénaïque et en Tripolitaine---
The book was translated to Arabic by Dr. M. El Wafi –Fateh University- in 1972.
Posted by Omar Gheriani at 9:25 AM

There is a lesson there for many so called Muslims, this is how the Libyan & Turkish people treated the prisoners of their enemy that invaded their country, humanely and with dignity just as our Muslim religion demands.
I really enjoy reading about our Libyan history, thank you Gheriani and I hope you post more.

Dear Abughilan,
I have noticed your blog on Libyan history while I was searching for the memoirs of French war journalist Georgs Remonds and I also found that you have purhcased his old book on the Turco-italian war 1911-12. G: Remonds was an objective journalist and I must add that I appreciate your translations of his french book into English. I am an amateur history writer who collects everything about Turco-italian war 1911 at Tripoli and Tripolitania (I am writing a detailed book on this war from English, ıtalian and Ottoman sources). The book you have been transating is very important.
Thanks for your effort and if you accept I would like to contribut on this hnourable war of Arabian and Turkish soldiers in your blog.
Best wishes,
Aydin Saray, M.D. (Plastic surgeon)
aydinsaray@hotmail.com