G. R. wrote:
“I crossed the Libyan borders on horseback from Tunisia at Zeheba ذهيبة check point on 17/01/1912. I was accompanied by my Algerian translator Al Allami Alleash العلمى عليش and an Algerian Sebahi horseman من فرسان السباهى assigned to me as a guardian until I would arrive safely at the town of Nalut, by 1st Lieutenant Buffet and his deputy Lieutenant Billier – from the French Army stationed at the borders.
I arrived Yesterday afternoon in Nalut (the first western town of Jebel Naffusa). The town consisted of a few white houses, another type of homes dug in the earth and then some fortified village built on the sides of a very deep valley. In the middle there was a formidable castle –Quasar. Its walls were built from huge rocks and its summit was shining under the sun glare. In the sunset, the view seemed to my as coming out of legends.
The following morning I walked with my companions in the lanes of Nalut and entered its Quasar through a low doomed arch. I saw the faces of men covered by white robes and sitting in groups In the shadows. The width of those lanes was no more than one meter, may be even less. On both sides, there were stairs leading up to rooms like birds nests or more like holes engraved in the rocks. People here used these spectacular rooms as homes (in times of unrest) or stores for their harvest. Above my head I saw some beams of wood between the walls to prevent them of crumbling down the lanes. Then we walked out to the sunshine where we came upon a wide valley descending deeply between two hard mountains.
Nalut population was estimated at 4000 citizens of whom only 1000 remained. Men have gone to join the war at the battle fields in Azizia and near the coast against the Italian invader. The people I met offered me their best hospitality, and at noon we were invited to eat the traditional Bazin which consisted of a solid pudding of barley flower, of hot spicy sauce and big chunks of lamb meat. The meal was presented to us together in a big dish made of wood, its cover made beautifully of colored palm tree leaves. We ate together using our fingers (Bazin has to be eaten by fingers!) and it was very delicious.
After lunch, I talked with a camel owner negotiating hiring his camel. I discussed my trip with the local Turkish and Libyan authorities presented by the Police Chief, Deputy of Local Governor and one of the Telegraph employees. I took their advices about the rout of my journey which I will continue tomorrow.
After two days, I was ready to leave Nalut on the road to Gharyan. I was told the caravan I would join includes the camel carrying presents and clothes sent from Italian families in Italy to Italian prisoners of war held captive in Gharyan – of which I was asked to take care of their delivery at their destination before entering Libya.” 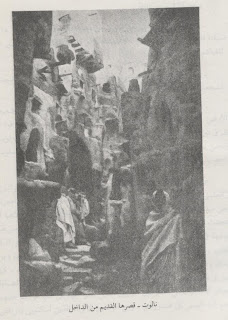 The interior of the old Quasar of Nalut

Posted by Omar Gheriani at 1:05 PM

Where did you dig all this from ? wonderful simply great . Thank you and keep blogging

Indeed, what is the title of that book? Is it in English or did you translate Remond from french?

Thanks highlander and safia for your interest. The translator was
lucky to get his French copy from an Arminian librarian dealing in old books in the Latin Quarter of Paris I think in the late sixties and published two editions of his translation of (Aux campes de Guerre Turco-Arabes), and I am translating from his second edition of 1982.