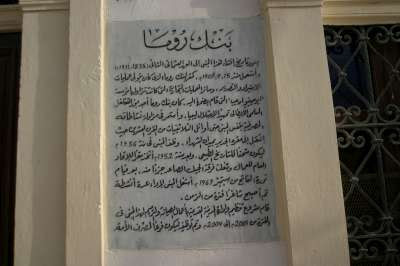 Like Today, one hundred years ago, Rajab Pasha, Ottoman Governor of Libya, was informed by the Chairman of Banco di Roma, that the bank has opened an Agency in Tripoli City to perform all commercial and financial operations that were overtaken by the Italian commercial company Arbib, which holdings were bought by Banco di Roma.
Italian Banco di Roma, was founded as a private bank in 1880 with a capital of 6M lira by a group of catholic church related Roman nobles and with support of the Vatican itself. The bank invested in the beginning in the private services sector in Rome, such as water, gas, electricity, mills and transportation utilities. In 1905 its capital reached 30M lira.
IN TRIPOLI, the bank started its activity in this way, as buying another existing holding company, in order not to be in breach to the Ottoman Imperial Decree of 03-12-1887 that obliged all foreign companies wishing to open branches in the Ottoman lands to obtain a permit from Istanbul.
The decree exempted foreign companies, that were already in existence in Ottoman lands at its issuance date, of such compliance.When Rajab Pasha did still reject the acceptance of this maneuver, the bank (through the Italian government) exerted enough pressure on Istanbul until the Grand Master ordered Rajab Pasha to accept the situation as it was – temporarily.

In its first year, the bank opened another agency in Benghazi and several others in Khoms, Zletin, Misurata, Zawara and Derna. The bank had some admirers in the local community –Libyans, Jewish and Maltese- who promoted its activity and preached its virtues and were paid handsomely for their services. The bank offered loans with a very acceptable interest rate, only up to 9 %, and encouraged its customers to obtain loans against land mortgage, and when they failed to pay back, the bank acquired the land. The bank had also a scheme of buying lands through agents for prospective Italian colonials coming to Libya at a later stage.
In the commercial sector, the bank invested in import/export activity, maritime lines and such financial aspects. In the industrial sector, the activity took form of olive presses, a flower mill, an esparto grass press, a soap factory, a machine shop, an ice factory, an establishment for the preparation of ostrich feathers, another for sponges, a quarry---etc.

Dr. Eugene A. Staley, an American international economist, wrote a case study about War and the Private Investor, in which Tripoli was of such Type Cases.

“Another war often ascribed to the direct influence of foreign investments on foreign policy is the Turco-Italian War of 1911-12, which resulted from Italy's seizure of Tripoli. In this instance the Banco di Roma is supposed to have pressed the government into action in order to protect its investments in Tripoli and to enhance the value of its land holdings.”
“The Banco di Roma established un-economic "economic interests" in Tripoli at the urging and under the subsidy of the Italian government, which already knew that some day Italy was to assert itself as a great power by taking that territory from Turkey. When Turkish resistance to this policy of "peaceful penetration" imperiled the bank's enterprises it did add to the general pressure on the Italian government for immediate and decisive action of the sort which had been contemplated anyway for years, and in this sense the bank did become an active instigator as well as a passive instrument of state policy. This is a rather general characteristic of private investments used as tools of diplomacy. They do not remain merely tools, but having been led into rather large risks in support of government policy, they in turn demand that the government support them, which usually means a pressure that is hard to resist in favor of continuation and intensification of a policy of aggressive penetration. This might be called the "balance wheel" effect of private investments used as diplomatic tools; they add momentum to policy. Some details of the Tripoli case are most enlightening and will be briefly recited.

It is easy to establish beyond any doubt whatever that long before the Banco di Roma went to Tripoli, Italian statesmen of nationalist inclinations were definitely planning to take the territory.”

To read more, here is the link:
http://net.lib.byu.edu/~rdh7/wwi/comment/investor/Staley03.html 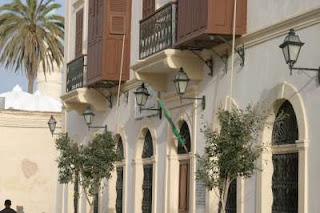