THE ISLAMIC ARTS AND CRAFTS SCHOOL OF TRIPOLI 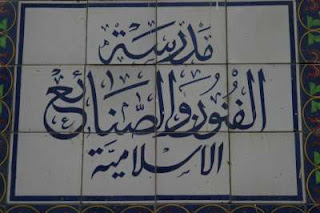 The people of Tripoli were used on Thursdays afternoons in the sixties to watch young kids in their early to mid teens smartly dressed in clean , ironed and beautiful uniforms, walking down town in twos or more. Those were the students of the Islamic Arts and Crafts School on their weekly time off when they enjoyed some free time from their semi military discipline.
The creation of this school started as an idea as the good doers and considerate citizens of Tripoli city remarked by the latest years of the nineteenth century that there were Moslem poor and orphaned kids in their town that needed attention and to be taken care of. They thought of a school to teach those kids sciences and train them in modern trades in order to earn their living. The project was then adapted by the Administrative Council of Wiliyat Tripoli, headed at the time by the Turkish Wali Namik Pasha and in cooperation of a Civil Committee of the notables of the town. Donations were collected from able citizens, and the municipality of Tripoli city allocated a piece of land –used to be an old cemetery- of about 24,000 m2. The school was built then on 4,000 m2 and the rest of the land was to be used as means of bringing revenue for it.
The school was opened in 1899 during the reign of Wali Mohamed Hafid Pasha, and was named Al Hamedia Technical School –after Sultan Abdulhamid of Turkey, in the street of the same name. The government allocated a percentage of exportation taxes on commodities such as al halva and olive oil in addition of the hinterland ‘miry’ tax to support the school budget. The government also paid the salaries of the teachers and technical instructors. The school was run smoothly and efficiently and had its own regulations and texts and very quickly arrived a stage when it gained some sales income of the creation of its students.
It started with 108 students, to which was added a girls’ section in 1903 of 20 girls being trained on rug-making, embroideries and such crafts.
Mrs. Mabel Loomis Todd in her book ‘Tripoli, the Mysterious’ wrote about her visit the school probably in 1905; quote:
“The technical school for poor and orphaned children was housed in a new building, where we were greeted by the grave and competent principal. In their bare reception room Turkish coffee was immediately served. Through many other apartments we were escorted, where boys were working at turning-lathes, and making furniture, machinery and shoes, weaving silk into barracans, dress materials and curtains. The blacksmith shop was equipped with bellows and other appliances exactly like those in use for centuries, and three men were pounding an anvil, making a favourite Arab tune. All colors worked peacefully together, blacks from the Sudan, browns from Misrata and Gabes, lighter tinted Arabs – all races without distinction were amicably friendly.
Across a hot garden , past a paddock full of rams and goats (once an old Arab cemetery), we reached the building where girls were busy at rug–making, and where a demure jet-black maiden had to go ahead to warn the school of our coming, that the little girls, some of whom were old enough to be attractive, might adjust their barracans over their faces before the head of the school and the foreign gentleman should arrive. Under ten years the children remained uncovered.
All turned and saluted us with a charming manner, and at a signal turned again to their weaving, which they did with great speed, copying a design prepared by some supposable artist. Workmanship was very beautiful, pattern very bad – flags, patriotic insignia and the map of Africa, with hard outlines and crudely brilliant colours.” Unquote.
After the Italian invasion in 1911 the school was converted to a detention centre – the equivalent of Abu Ghareb in Tripoli. It was reopened in 15/09/1913 under the Italian colonizing authority. The girls school was closed and the machines and the printing press of the school were sold. During the second world war it was converted to a military garrison and a warehouse of military hardware.
It was reopened during the British Administration rule, and served its objective to the best after Independence. It became the needed recruiting pool for the booming oil industry and its graduates –who were example of good morals and discipline- were much welcomed to fill the technical jobs in the various oil companies operating then.
In 1972 its budget reached 200,000 Libyan Dinar of which 130,000 Dinars came from its sales and revenues. Its musical band was very popular during national festivals.
Since the revolution, many changes have occurred in the Libyan society that diminished the role of the school, however, the Islamic A & C School remains a live example of the compassion, caring and belonging the City and its Citizens had shown to their little brothers and sisters in their time of need almost a century ago. 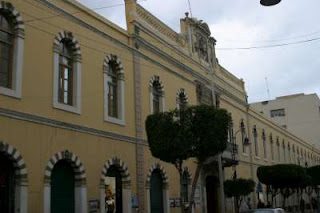 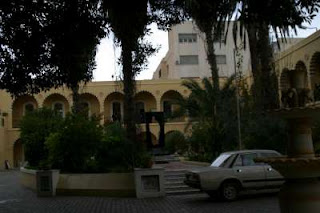 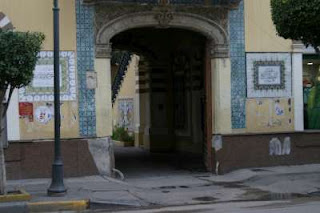 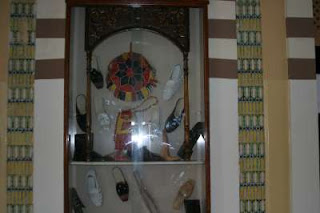 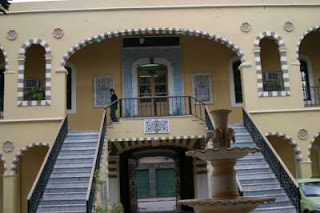 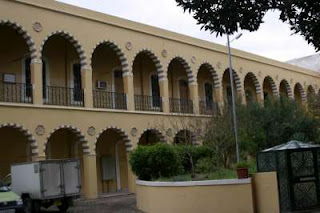 I remember this place very well and I remember the band.
I have never been inside, it really is a beautiful building, thank you for the information.

thanks for the great info. and yes it's beautiful place and always some embassies made parties there"culture one"