A BRITISH DOCTOR IN YEFREN

An excerpt from the British Journal of Nursing of 23rd April, 1912:
Quote, “Mr. Ameer Ali, President of the British Red Crescent Mission in Tripoli, is appealing for funds in support for the work of the Red Crescent Society.
He has received word from the director of the mission from Dahibat (in Tunisia) that, “the refugee coast population are suffering from starvation,” and asking that an appeal may be made to Great Britain, India, Egypt and the British colonies for relief funds.” Unquote.

In the summer of 1912, British Doctor Ernest H. Griffin was in Paris enjoying his vacation when he, “first heard the British Red Crescent Society was on the lookout for surgeons to assist the wounded Turks and Arabs in Tripolitania.”
He went back to London and soon joined the BRC. On 7th September, 1912 he was in Charing Cross station, “carrying with me to Tripolitania twenty large cases of surgical and medical stores, in addition to my personal luggage”, leaving to Marseille, and then by boat to Tunis city. He then continued to Sfax by train and to Bingirdan by a small boat. The mission entered then Tripolitania on horseback with camels carrying their luggage.
The mission consisted of two surgeons, two nurses and materials and supplies for a mobile hospital. After a short sojourn near Zavia town, the mission hospital was moved up to Yefren on 13th October, 1912 carried by a caravan consisted of 120 camels and protected by 24 gens d’armes provided by the chief of the Western Mountain Sullieman Al Barouni.
In Yefren, the hospital was installed in the ex Turkish hospital building and the members of the mission were lodged in the court building.
After Turkey had signed Lausanne Peace Treaty with Italy in October 1912, the last of Turkish soldiers were withdrawn on 07th December 1912, the Libyans of Tripolitania made then a Declaration of Independence of the young Arab State on 27th December 1912, and a government was established under Sullieman Al Barouni with its siege in Yefren, and Al Rabta near Gharyan became the new military headquarters instead of Al Azizia. This government controlled an area 300 km long from the Tunisian borders to Werfella at Ben Waleed and combined the Libyans who were opposing the Italians.
Libyans were left on their own for the first time of history in front a mighty and alien enemy, one of the major colonial powers of Europe.
Dr. E. H. Griffin wrote a book later on called ‘Adventures in Tripoli’ in which he left us a very detailed account of his stay in Yefren and Tripolitania. He referred to Al Barouni as an educated, intelligent and strong willed man. He described Yefren streets as being clean, paraffin lamps being lit at night and patrolled by gens d’armes. He described the existence of an organized people’s authority that provided the services needed to run a civic society such as justice, security, telegraph services with the free towns on the coast and Tunisia, and recruiting and training fighters for the Jihad against the Italian enemy.
He told us of Abdullah who was a French Moslem and Al Barouni explosives expert. He made friends with Sheik Sassi , local ruler of Yefren, with Khani who was Al Barouni flag bearer and Jameel the Turk telegraph operator who remained with his fellow Moslems in Yefren.
He observed that the Jewish community of Yefren lived in harmony with their Moslem neighbors and they were well treated by them, and both of them were very strict in observing their respective religions.
By the end of winter of 1913, he was assigned a mission of establishing a clinic to provide medical assistance down near Al Joush on the way to the coast. That was when he visited Al Rabta , the Mujahedeen camp.
He noted that the Libyan fighters were a panorama of all colors and all ages, and they were very poorly armed. Some of their arms were actually medieval like swords, lances and very ancient guns that were taller than a man, the only modern arms they had were captured from Italian soldiers. However, he added, that all of them shared an absolute love for their independence and their freedom. He described also that there were many refugees fleeing the coastal towns in fear of a repetition of Italian atrocities of Tripoli the year before. He wrote that many poor people were wondering aimless, hopeless and desperate and the war made beggars of many of them. By the end of March, 1913 he was heading back to Yefren when the great catastrophe fell down.

(( On 23rd march, 1913, the Italian army made a great offensive on a long front of more than 30 km from Al Rabta–Mantrous Al Asswad to Jandouba in Al Assabaa with an army of 40,000 Italians, Eritreans and local bands armed with modern rifles, mountain guns and vehicles, and was met with a total of 11,750 Libyan fighters and 250 horsemen, without any military modern hardware, in Jandouba. This was what to become the renowned battle of Al Assabaa or Jandouba, in which the Italians at great cost made their first major victory and hundreds of Mujahedeen won their passage to the afterlife. Sheik Mohamed ben Omar Beausaifi الشيخ محمد بن عمر البوسيفى chief of the knights, freed his horse, let it go, and tied his own legs to make the last stand and said his famous words addressing his horse:

بعد اليوم ما عاد في ركوب ولا ليك بعد اليوم صاحب، الصاحب اليوم يا يعيش عزيز ، يا يدوسوه الطليان بالكراهب
“After Today, there will be no more riding,
And you will have no master,
Either your master lives free,
Or be run over by the Italian vehicles.”

He died with 300 hundred defenders to make the withdrawal of Mujahideen from Jandouba possible.
At the end of battle the Italians made some push forward into the hinterland to the west and south.))

Dr. Griffin was approaching Yefren when he was met with refugees coming down the mountain fleeing the Italian offensive. He went back to the plains when he was met with more refugees heading towards the dessert fleeing the Italian advancement from Ajeelat and Azzizia. He described how people were running astray, leaderless, hopeless, homeless and starved. In times like these, the true qualities of Man were displayed. There were thieves, marauders and cut throats. There were also valiant people, honest and brave. There were people who cared and others who careless. There were grateful people and others who were ungrateful. There were good people and vile ones, en bref, there were angels and devils. Humanity presented all, its lowest , its highest and in between. There was also an exodus of Libyan fighters to regroup in a safe haven in the desert. For the Libyan, the desert became the refuge, the citadel and the last hope after the mountain fell to the enemy.
Griffin had to go through this nightmare with his companions. And while, the desert presented the last refuge for the Libyans, for him it was the way he had to cross in order to arrive to Tunisia, to a world where sanity still prevailed.
On this rout, he met all kinds of obstacles. He was subject to betrayal, deceit and treachery and was close to death more than once. But he was also helped very courageously and valiantly by his companions and some of his former grateful patients who were ready to defend him with their own lives until he arrived safely to the Tunisian border.

THANKS TO DR. E. H. GRIFFIN FOR ALL HIS HUMANITARIAN DEEDS IN OUR LAND AND FOR RECORDING OUR HISTORY WHEN OUR FIGHTERS WERE BUSY MAKING IT.

On 10th December 1914, Colonel Miani who led the campaign to the south to occupy Fezzan after the battle of Jandouba was defeated by Mohamed ben Abdulla Beausaifi محمد بن عبد الله البوسيفى and his fighters, one of the Libyan commanders of Jandouba , and the Italians were kicked out from Morzug and Sebha.
On 29th April 1915, the same Colonel Miani was defeated by a confederation of all Libyan forces in Al Gurdabia Battle معركة القرضابية – in Sirte – which resulted in a wide spread revolution in all Libya and the Western Mountain was liberated again once more – for sometime…..
The Italian invaders remained cornered in the coastal towns for about eight years until the plan of recolonizaition of Libyan provinces was put into effect under General Gazziani, the Butcher of Cyrenaica. 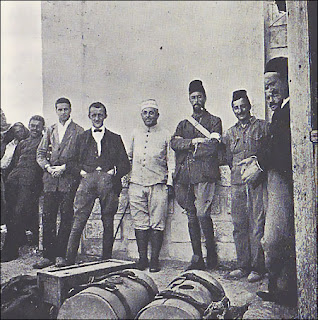 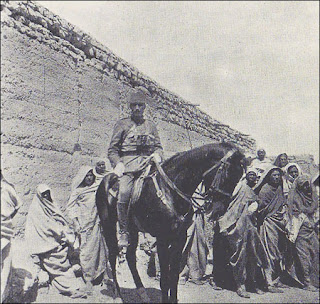 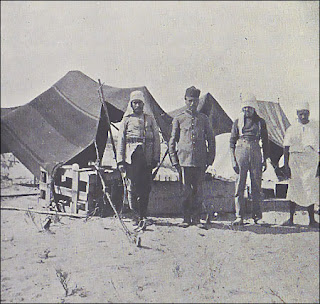 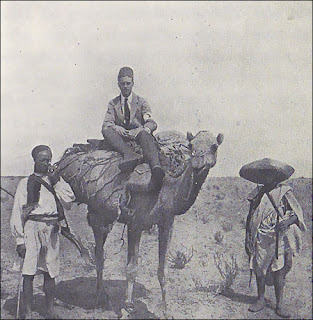 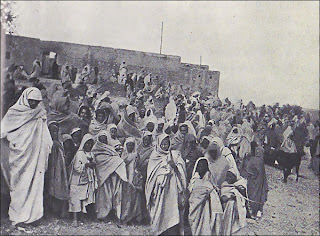 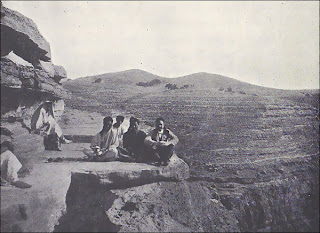 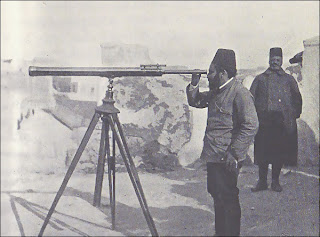 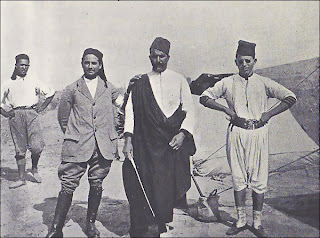 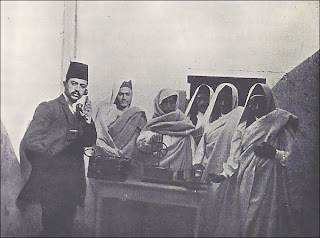 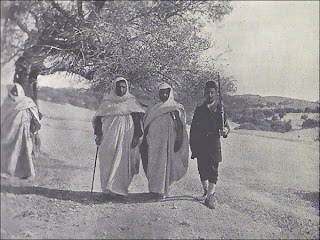 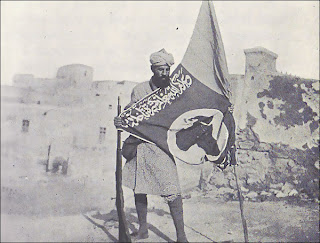 Posted by Omar Gheriani at 2:42 PM

Did I tell you before how much I enjoy your blog and how much I think it is valuable in displaying important aspect of Libya?

Well even if I have here I am saying it again :)

Thank you Abughilan you are a gem !

Thank you very much anglolibyan, and highlander you made my day, thank you.

Very informative, appreciated and applauded.
Do you happen to have the history of the people of Greater Tripoli and where they originated from?
What happened to the Spaniards who occupied Tripoli before they were kicked out by the Ottomans?
Did any of those Spaniards accept Islam and did they leave any offspring around Tripoli?
Thank you so much for the precious information you put out.

Thanks onlibya for your kind words.
The Spaniards were actually replaced by the knights of St. John of Malta, however in reply to your question; it seems that spaniards (and other Europeans) probably left some of their offspring as part of Tripoli population but mainly during the sea wars of the so called Barbary coast.
However, if I dig out something I'll let you know.

Dear Mr Gheriani, are these photographs from the book mentioned by Griffin? or from different source. Thank you.

Dear Mr. Ali, absolutely all these pictures are scans of many pictures in Dr. Griffin's book "Adventures in Tripoli". The Arabic version of the book published by Ferjani Bookshop in 1993 and translated by "نمير عباس مظفر".

Many thanks for your reply regarding the photographs in Dr Griffin's book. The reason for my question is, I have obtained a photograph album contains over 100 photographs compiled by the director of the British Red Crescent in Tripoli between Feb. & Dec. 1912. What surprise me is that all photographs in your article, apart from one, are from this album, this led me to believe that this album might be once belong to Dr Griffin himself, or to other personal of the Red Crescent in Tripoli, if there are more than one album been made.
Now, I have many people would be very interested to buy this album from me, but I thought if there is a Libyan establishment you know could be interested, that will give it a better usage for wider society.
Please REPLY PRIVATELY to my email ali_wahab@hotmail.com.