A PORTRAIT OF A FIGHTER WOMAN

THE LADY OF AL AZIZIA
She was called Slema Bent Maghawess سليمة بنت مقوس . A woman from the tribe of A Nnawael النوايل . She became famous in February, 1912 for participating in all the battles against the Italians in Tripoli region since the invasion. She was injured when a bullet hit her chest. She was transported to her home for treatment and rest. After two weeks she was back to take her position between the Mujahedeen. Paul Tristan, correspondent of the French newspaper ‘Le Petit Marseillais’ of the city of Marseille became fond of her and gave her a present: A Sword. Georges Remond, correspondent of the Parisian ‘L’Illustration’ took a picture of her holding her sword as you see below. Georges Remond wrote also that twelve fighting women joined her, in the Al Azizia Mujahedeen camp, later on arriving from Fezzan. 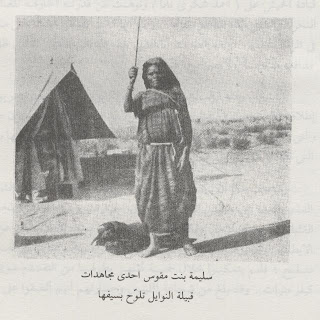 I do know about this lady, I have read about her, a real life hero.
Allah Yerhamha.

Yes, AngloL and there were quite few like her of what I read.
Happy Eid.

Fascinating!
What book was it taken from?
This woman should not be buried into oblivion!!