Today is a Remembrance Day in Libya in honor of the thousands of Libyans deported to Italian dreary islands during the Fascist era for their role in the Resistance at the time. As Grazziani, the Italian well-known General of the time, said that he had only three options for Libyans not accepting Rome’s supremacy, and these are; the gallows, the concentration camps or the boat for the islands. Thousands were deported and most of them perished away from home in a hostile land, the remainders who came back bore scars of sufferance for the rest of their lives.
Meantime, Benghazi had its own sad gloomy day, as the worst sand storm of the season raged in the area, leaving the streets empty and dusted. 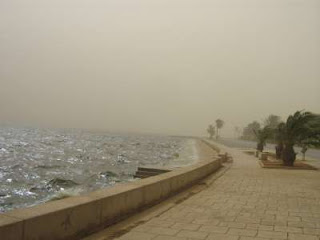 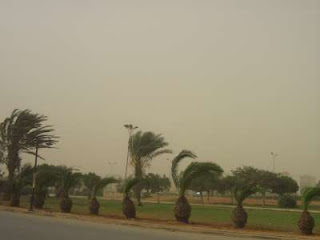 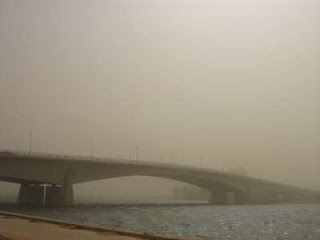 Posted by Omar Gheriani at 1:39 PM

I can imagine how it looks in benghazi from the pics, it's the sad windy gibli of benghzi, it couldn't be worse, and the day holds alot of sufferness of libyans in the past, may be there is a connection or it's just the usual weatehr of benghazi!!

Yes, it was a miserable day. I'm sure you don't miss this!

Thanks for remembering our ancestors Gheriani, also thank you for the photos of Benghazi.

It is a tragedy that the world still not talking much about it.. I hope those who were lost will be remembered and honored as they deserve.
About the Gebli,,OMG,,what a day... Don't u just love it??and to make things even better,my car's AC is busted
Regards
Benghazi Citizen

Thanks Highlander for stopping by, and you're welcome. BC, sory about your AC, and regarding that the world is not making much attention about this subject, I always believed that the other subject of the concentration camps is a much serious matter, but it seems that right lies only withen might.

Your blog is very interesting . Why haven't you made an entry recently . Would be nice to read what you have to say . OTE